Major Event in History for the Cassowary Coast and Bramston Beach

It was late 1871 in Sydney and promoted as the adventure of a lifetime, 76 men each paid 10 pounds for part ownership of the sailing Brig, ‘’Maria’’.

Forming the ‘New Guinea Prospecting Expedition’ (NGPE) the men planned to sail to Papua New Guinea in order to establish a colony and to exploit that island’s reputed riches in gold and timber which were yet untapped.

Excitement prevailed over good judgement as the ‘’Maria’’ was not at all seaworthy, she leaked requiring constant pumping to remove the water. To compound matters the ‘Maria’ was not a passenger vessel, it was a Sugar and Coal hauler and had only 3 lifeboats.

Of the 76 men only 6 were seamen, they also soon discovered the ‘Maria’ was not licenced to carry passengers so passengers were designated as crew and promised a minimum wage, problem solved!

Within days of the proposed departure Captain Gillespie refused to sail the ‘Maria’ citing illness, perhaps he knew it was an ill fated journey and knew better. So as not to delay the expedition German Chief officer Mr. Stratman was promoted to Captain the day before the ‘Maria’ sailed on the 25th of January 1872.

‘Maria’ was east of Townsville on the 24th of February 1872, about a month after departure where she encountered a monsoon trough bearing down from the North, she made her way through the reef just North of Cleveland Bay looking for some protection. At 3:15am the 26th February the crew were awakened by a horrible grating sound, the ‘Maria’ had struck Bramble Reef, 35km east of Hinchinbrook Island.

The Captain soon left with the largest lifeboat capable of holding 25 men with just 6 men. They promised to bring help but in fact had deserted the ship. (They made their way to where Mission Beach is today, the Captain was killed by Aboriginals and others wounded).

The men on the ‘’Maria’’ had 2 remaining lifeboats, not enough to transport 70 men, 2 rafts were built hastily out of timber and lashings. As daylight broke the tide rose, the ‘’Maria’’ was stuck with water filling her holds, many believed they would be safe on what remained above the tide. As the tide rose further the ‘’Maria’’ became unstuck and slid off Bramble Reef where many drowned or were eaten by sharks.

The 2nd lifeboat carried 19 and made its way to south of Hinchinbrook Island and up the Hinchinbrook Channel to where Cardwell lies today.

The 3rd lifeboat carried 12 or 13 men, some perished after being attacked by Aboriginals. 9 made it to Cardwell following the same route as the 2nd lifeboat.

The smaller raft carried 12 where one drowned on route to the coast just south of where Innisfail is today, the remaining 11 were killed by Aboriginals.

The larger raft carrying 13 men capsized often and 5 men drowned during the ordeal. The raft drifted Northwards onto the white sandy beach 3km South of Cooper Point at Ella Bay where the exhausted men found some refuge under some bushes and built a temporary shelter made of bark, branches and leaves.

Over the next 13 days the 8 men tried to make their way south but could not cross the Gladys River (the Johnstone River at Innisfail). The men befriended Aboriginals and made their way North again to cross the Ella Bay headland entering Wanjuru’s tribal lands where Bramston Beach is today. The men were rescued by boat at Bramston Beach on the 12th of March 1872.

The Weather station is on the beach dunes 200 metres South of the Caravan Park. Click graphic to get current and historical data.
For the latest Bramston Beach news and community happenings click on the image below to visit the 'Bramston Beach Life' Facebook page. 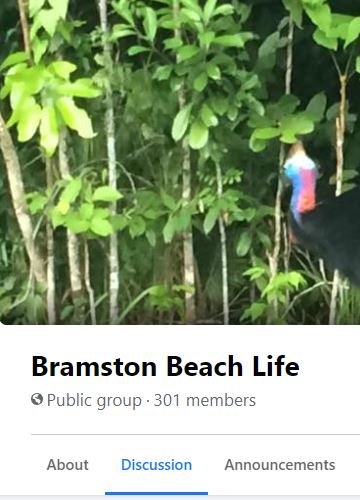 Meets at 10:00am, Thursday mornings at The Cafe. No need to be crafty, come and join the local ladies for a coffee, chat and a bit of togetherness !!!